CE is a miniaturized analytical technique which appeared at the end of the 80s as an alternative to chromatographic techniques. CE allowed the separation of various ionized or ionizable chemical compounds in glass capillaries under an electric field.

In CE, a low volume of sample is loaded into the capillary in order to maintain a high efficiency.

Quantitative sample injections can be accomplished by two different modes :

The Transport of chemical compounds inside the capillary is controlled by two phenomena :

The electroosmotic flow and the electrophoretic migration.

Under main aqueous conditions (pH > 2.5), the silica narrow bore capillary surface possesses an excess of negative charges resulting from the ionization of silanol groups. Counterions (cations, in most cases) which build up near the surface to maintain charge balance, form a double-layer and create a potential (zeta potential) difference close to the capillary wall. With the voltage application, the cations forming the double-layer are attracted towards the cathode and the resulting flow has a flat profile. This electroosmotic flow can be modified, inversed or deleted by a covalent or dynamic capillary wall modifications using surfactants or neutral or ionized polymers.

Today, CE appears as a performant and interesting analytical technique with rapid, efficient and highly resolutive separations, low solvant and sample consumption, and low-running costs. CE is a valuable alternative to chromatographic techniques and can solve analytical problems.
The versatility of CE is partially derived from its numerous modes of separation. The separation mechanisms of each mode are different and can offer orthogonal and complementary information. 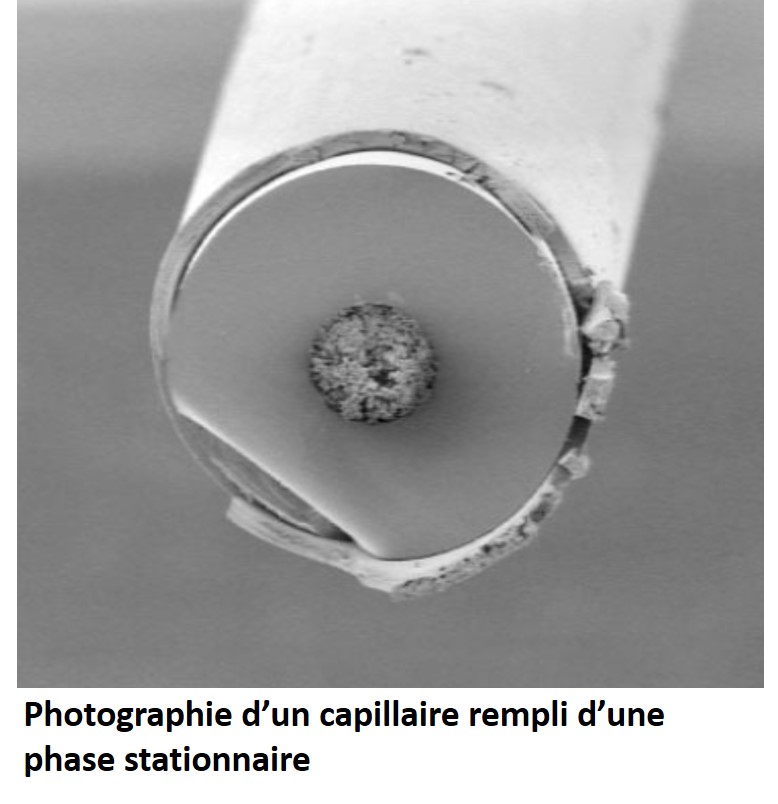 The EC can finally be used with a filled capillary:

The Capillary Zone Electrophoresis (CZE) is the most widely used mode due to its simplicity. CZE allows the analysis of ionized or ionizable compounds. Analytes are simply separated according to their charge/hydrodynamic radius ratio and migrate towards anode or cathode according to their charges. Neutral compounds are not separated with this separation mode. The running buffer is extremely important in CZE and is the same in both separation vials. During a CZE analysis, the analyte apparent mobility is directly related to its migration in the capillary. The apparent mobility of an analyte is a vector sum of the electrophoretic mobility of the analyte plus the electroosmotic mobility of the buffer.

Micellar electrokinetic chromatography (MEKC), is one of the most widely used CE modes. This mode can be used for the separation of neutral compounds as well as charged ones. The separation is accomplished by using surfactants in the running buffer. At concentration above the critical average, micelles are formed in the capillary. During migration, micelles can interact with neutral compounds in a chromatographic manner through both hydrophobic and electrostatic interactions. The more the neutral compounds interacts with the micelle, the longer its migration time is.

Chiral separations are easy to perform in CE. By adding chiral selectors (Cyclodextrins for example) in a running buffer, we allow the enantiomer to separate.

Capillary Gel Electrophoresis (CGE) allows the separation of molecules according to their sizes. The size separation is currently used for protein analyses and is carried out with a capillary filled by a Gel Buffer which limits heating and acts as a molecular sieve.

Detection in CE is a challenge due to the small dimensions of the capillary and the low injected volumes. A number of detection methods have been used in CE.

UV-Visible absorption is the most widely used detection method. It was carried out accross the capillary with creation of a detection window by burning the external polyimide layer. To increase sensibility (which is low due to a short path length), Z-cell or bubble cell can be used.

Contactless Conductivity Detector (C4D) is a valuable alternative to UV detection for the analysis of ionized compounds. This detection method is universal and is based on conductivity measures between two electrodes placed on each side of the capillary.

For organic compounds, amperometric or fluorescent detections can also be implemented.

Detections by Mass Spectrometry have grown significantly for CE separations since the 90s. Two interfaces are available : interface with or without sheath liquid.

Wynsep has developed a new generation of Capillary Electrophoresis